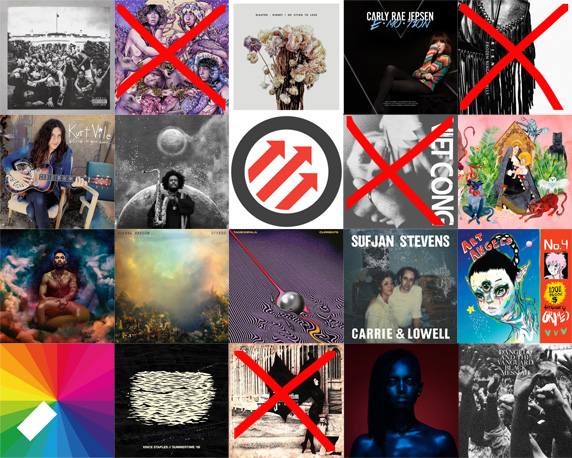 Love them or loathe them, Pitchfork are still one of the biggest champions of the album format: Lots of words on lots of albums, that’s their strapline*. At the end of 2012 I wrote a piece on whether we could keep a check on the health of the album by analysing data from Pitchfork’s reviews since 2010. I did the same at the end of 2013 and 2014 and made some predictions based on the results. Below are the 2015 numbers, and the results of how those predictions panned out:

For 2016, I predict we’ll see the average score stay the same at 7.1, with the number of albums scoring 9.0 or above staying below 1% (I reckon between 5 and 8 albums). I’m guessing that we’ll see a similar number of publishing days next year, which should mean a similar number of reviews (i.e. slightly down on previous years), unless they make a lurch further into the pop market

Will there be another 10 awarded in 2016? I’m going to say no, because I think they’ve lost their nerve. But I’ll hedge a little here and say that If they do hand one out, it’ll either go to a fairly mainstream artist or a solo female artist. With Taylor Swift and Carly Rae Jepson clearly taking them by surprise in recent years and the fact that they are now owned by Conde Naste who see the brand as a way of “engaging high-value millennial audiences”, I think it’s safe to assume we are past the days where …And You Will Know Us By The Trail of Dead could earn a 10 review. Shame.

Will we continue to see the percentage of albums scoring 6.4 or lower continue to shrink? That’s a hard one. The trend says yes, but my heart says no. It can’t be a good thing to squeeze everything into the middle, and, y’know…some albums are just a bit shit.

Pitchfork’s Best Albums of 2015
Pitchfork’s Top 50 albums list3 used to closely tally with their highest rated albums of the year (with a few albums that fall out of favour or are bumped higher up the list), but last year it appeared that they changed the way they compiled it. Not all the Best New Music tagged albums figured in the top 504, and the order they appear does not necessarily equate to their score. The golden rule is, don’t release a metal album.

1Pitchfork review five albums a day each weekday excluding American public holidays, a summer break in August and and none during the industry down time of the last 2-3 weeks of December when practically no new albums are released. Plus, this year they didn’t start the new reviews until a week later than 2014 and may have taken some extra time off around the Pitchfork festivals, publishing reviews on only 226 days versus 2014’s 233 in 2014 (when they managed to score 1224 albums). Individual albums in a box set will often get individual scores, hence the slight variance in each year’s review numbers.

2I call a score of <6.5 ‘The Everrett True mark of failure’ after the music critic who ranted about “a world full of music critics lazily and cravenly praising everything in their path … for if they don’t, their editors won’t run the review or feature or article. Look around you. It’s already happened. How many reviews graded below 6.5 stars do you think Pitchfork runs?” His opposition to what Pitchfork does having coloured his views of a an easily verifiable fact. i.e. even Pitchfork thinks that a quarter of the albums they review aren’t very good and are unafraid to say so.

3 Called ‘The 50 Best Albums’, and no longer qualified as “based on the impassioned and knowledgable opinions of our writers and editors” but “Presenting our list of the Top 50 Albums of the Year. Records released this year and records that made their greatest impact in 2015 were eligible.” Filed, as in previous years, under Staff Lists.

4 D’Angelo’s album missed out as it was released after the list was compiled. Don;t expect to see it next year as

5 The best time of year to release an album in previous years: