Another great year for new music with 370 tracks from 315 artists featured on In The Pharmacy during 2013. Unlike 2012, this was also a great year for albums. I gave at least a couple of hundred more than a passing spin and have around 50 that were in contention for the end of year list, but in the end the quality of the top 20 deserved singling them out and ranking them.

1) Vampire Weekend  Modern Vampires of the City
Religion and mortality obsessed genre hopping tour de force. I loved their debut but found Contra lacking in good tunes. Not a bad album, just nothing to get excited about. The release online of ‘Step’ and ‘Dianne Young’, two very different but equally excellent songs was the first sign that their third album might be not just a return to form, but the best thing they’ve done. There is so much going on here, it’s amazing it doesn’t sound like a complete mess, but rather gets better on every listen.

2) Veronica Falls WaitingFor Something To Happen
Hints of psychedelia and a 60s sensibility amongst the indiepop jangle and harmonies.

3) Cults Static
Sixties girl groups, indiepop melodies, Motown inspired bass lines and beats meet modern production techniques. For me, this and Tame Impala are too sides of the same coin, Cults are the pop heads to their rock tails.

4) Torres Torres
Mackenzie Scott was only 22 when she wrote and recorded this stripped down, debut album, mainly just her and her (electric) guitar with bass, drums and cello used sparingly. Easily the most impressive debut of its type since PJ Harvey’s first album. This hasn’t been off my turntable since January and continues to reveal its gems.

5) The Dodos Carrier
Like their second and fourth albums (Visiter and No Color, respectively) this is an album that reveals its charms on repeated listening. Post-rock folk with a strong underpinning of excellent songwriting, much of it inspired by the untimely death of sometime second guitarist Christopher Reimer. The complex blend of what is mainly just percussion, guitar and vocals is what separates The Dodos from other minimalist duos – each element is as important as the others, and they create a tension and a balance that gets more beautiful the more intricate the interplay gets. There is also the judicious use of horns as on the wonderful ‘Substance’. Although there are a couple of tracks that feel like filler, the quality of the rest of the album is so high this album still ranks as one of my out and out favourites of 2013 and is one I am sure I will continue to visit over the years.

6) Okkervill River The Silver Gymnasium
A concept album about Will Sheff’s pre-teen years in small town New Hampshire in the 1980s. Some of his best songwriting and a wonderful sound that nods to that period beautifully without sounding too retro.

7) The National Trouble Will Find Me
Their most downbeat album and while not as flawless as High Violet, it’s another classic.

8) Arcade Fire Reflektor
I loved Funeral and The Suburbs but cared little for Neon Bible. This is like none of those albums, although it’s breadth and ambition has more in common with The Suburbs. Again, an album that reveals itself with repeated listens. 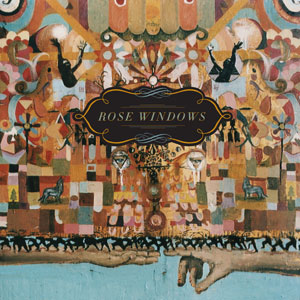 9) Rose WIndows Sun Dogs
Heavy blues, psychedelia and classic rock inform the debut from these pacific north westerners. They have people reaching for comparisons with Jefferson Airplane, The Doors and The Grateful Dead without actually sounding like any of them. Although they are the brainchild of guitarist Chris Cheveyo, Rose Window’s sound owes as much to frontwoman Rabia Shaheen Qazi and flautist Veronica Dye, the whole thing sounding like a gentler, more pastoral Black Mountain.

10) Neko Case The Worse Things Get, The Harder I Fight, The Harder I Fight The More I Love You
Recorded after fighting depression, this is Neko’s best album, the songwriting consistently excellent, though if pushed for highlights I would suggest ‘Night Still Comes’, ‘Local Girls’ and ‘Where Did I Leave That Fire’.

13) Foxygen We Are The 21st Century Ambassadors of Peace and Magic
Indebted to pastoral psychedelia and the sort of strung out rock and roll made by Bowie, Lou Reed and the Rolling Stones between ‘68- and ’71, this is a retro rocking beauty. If you like this, I’d also recommend Of Montreal’s much maligned, similarly indebted Lousy with Sylvianbriar.

14) Big Deal June Gloom
This is to the late-80s dreampop end of shoegaze what the Cults album is to sixties obsessed 80s indiepop. Boy/girl harmonies on the sweetest vocal melodies over fuzzed and effects heavy guitars.

15) Savages Silence Yourself
Swimming in the noisier and gothier, less agit funk end of post-punk, this is an incredibly energised guitar album, with its sonic roots in the bleak early 80s work of Siouxsie and The Banshees, Magazine and Southern Death Cult.

16) Daughter If You Leave
Of all the albums in my top 20, this is the one that appeals more for atmosphere and sonic dynamics rather than tunes per se. That’s not to say there aren’t some great songs on here (‘Winter’, ‘Human’, ‘Youth’, ‘Still’ for starters) but the magic is in the interplay of guitars, vocals and drums overlayed with Elena Tonra’s vocals.

17) Yo La Tengo Fade
Indebted to the fuzzy pop of the post-Cale Velvet Underground and the simple repetitive elements of Neu-style Krautock (motorik beats, simple guitar motifs), this is initially an understated work. But it reveals itself as a one of the band’s most beautiful and pleasing albums, eschewing their tendency for stretched out, zoned out jamming in favour of simple songwriting and restrained playing.

18) Kurt Vile Wakin On A Pretty Daze
Slacker rock genius follow up to Smoke Ring For My Halo. Recommended for fans of Neil Young’s ‘Everybody Knows This Is Nowhere’.

19) Atoms For Peace Amok
Was surprised this album didn’t feature more in end of year lists. Stronger in almost every measure than the last Radiohead album, King of Limbs.

20) Janelle Monae The Electric Lady
I could have given this final spot to one of about 20 other equally as good albums but chose this as it has the most ambition and, though it has a lot of filler in it’s 1 hour 8 minutes, there’s a brilliant 40 minute LP inside it. 70s sci-fi soul updated for the 21st Century.

‘Dark Was The Night’, the Red Hot Organization HIV / AIDS charity album produced by Aaron and Bryce Dessner from The National that I mentioned last week now has a confirmed tracklist. It looks pretty awesome – a veritable who’s who of North American indoe in 2009 – with a bunch of original tracks and some well chosen cover versions of the likes of Dylan, Shuggie Otis, Blind Willie McTell, The Troggs and Vashti Bunyan.

Confusingly, the Red Hot Organization’s MySpace page says that 32 songs were recorded for the project but their are only 31 tracks listed on the album (could just be a typo). The organization’s MySpace page will be streaming every track one at a time over the 31 days between Jan 15th and the release date on February 16. The site is on US time so if you’re quick you can still hear yesterday’s first track right now – Dirty Projectors and David Byrne’s Knotty Pine – and mighty fine it is too.

This Disc (Disc One)